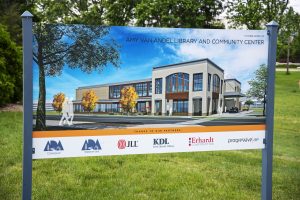 The name of a new library and community center in the Village of Ada was revealed Friday afternoon as the public portion of the fundraising campaign kicked off.  The Amy Van Andel Library and Community Center was announced during an event at the future site of the facility on Headley Street adjacent to The Community Church at 7239 Thornapple River Drive SE in Ada.

The fundraising campaign will support both the two-story library/community center and a new riverfront park that is being built in downtown Ada. Steve and Amy Van Andel are the lead public donors on the project and the library was named in honor of Amy’s support of and belief in the importance of libraries. Steve and Amy Van Andel are serving as Honorary Co-Chairs of the campaign, along with Jim and Kathy Hackett.

“We are so happy to support the exciting changes happening in Ada Village,” said Amy Van Andel, Campaign Honorary Co-Chair. “There will be something for every generation to enjoy in downtown Ada. It’s great to see a sense of community growing even stronger in our hometown.”

The total cost of the library/community center and riverfront park is estimated at $11.3 million.

Ada Township and the Ada Downtown Development Authority agreed to invest the first $4.3 million, with the remainder coming from the community

“Ada is transforming right before our very eyes and these two new projects will create lasting memories for families for years to come,” said Margaret Nault, Campaign Co-Chair.

The event, held immediately before the first 2018 Beers at the Bridge Summer Concert, gives Ada residents the first chance to purchase a $250 brick or $500 paver. Bricks and pavers will offer space for a family name or message to be engraved.  Citizens interested in the program can also go to www.ournextchapterada.org to learn more about how to donate and/or purchase a brick or paver. “This is a wonderful opportunity to bring long-time Ada residents together with many of our new neighbors as we help write Ada’s next chapter,” added Julie Veltman, Campaign Co-Chair.

Ada Township has already begun construction on the riverfront park project, which is located along the banks of the Thornapple River off of the newly-constructed River Street. Designed by local architectural design and engineering firm Progressive AE, the park will feature trails, play areas, a river overlook, amphitheater and public restrooms. Completion is anticipated for fall 2018.

Design of the Amy Van Andel Library and Community Center by the architectural design team of OPN Architects and Progressive AE is underway, with the construction process managed by Erhardt Construction.   The Kent District Library system will operate the library. Campaign and Township leaders plan to have the community center/library completed in early 2020.

“Ada is a distinctive community that has experienced tremendous growth and change and needs its own library,” said Lance Werner, Kent District Library Director.  “Public libraries are a key part of the community and we’re excited for Ada to have a library to call its own.”

In 2006, the Ada community produced a resident-guided vision for the future of Ada Village. Then, in 2013, Ada township officials, business owners and residents joined together in a series of more than 100 meetings and community forums to further clarify that vision. The result – Envision Ada – is a multi-year redevelopment plan seeking to expand retail, residential and restaurant offerings while showcasing the community’s natural resources and creating a more walkable community. Construction in the Village began in July 2015.