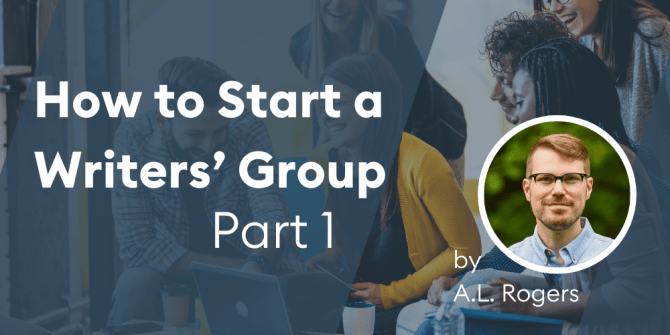 Writers’ groups are rock-band cool. It’s true! The Inklings. The Mandarins. The Harlem Renaissance. These are writers’ groups with band names.

The rock band comparison goes one step further, too. Some writers’ groups stick together for the long haul, while others implode with animosity and ego. While Aerosmith still tours, the members of Oasis can barely speak to one another.

So, how do you find a writers’ group? How can you make sure it’s a healthy one that lasts and gives you the opportunity to shine?

I am regularly asked these questions at writers’ conferences. It seems that everyone wants to find a good group—one that will truly help them develop their writing chops and maybe even help them get published, too. It also seems that many writers have been burned by bad experiences in other groups.

I often counsel writers to consider starting their own group. I did the same with a group of friends in 2007. (We dubbed ourselves The Weaklings, which sounds to me like a one-hit band from the ‘90’s.) Since then, everyone in our group has achieved individual writing goals and been published in different ways. I’ve also worked in the book industry since 2007 and have had the chance to discuss writers’ groups with various authors.

Over the next two posts I’d like to share some thoughts on how you can start a healthy writers’ group.

Surround Yourself with Like-Minded Writers

A good way to find out if someone might be like-minded is to ask them what their goals are for writing and getting published.

Goals can range from, “I want to finish the first draft of a novel” to “I want to sign with an agent this year” to “I want to build a resume’ of pieces published online.” It doesn’t really matter what the goals are. What matters is that you feel a kinship with their commitment to growing as a writer. Ideally, you’ll create a group in which everyone feels their goals are understood, appreciated and supported by the rest of the group.

I spent a couple of years focused on building a list of writing credits while another member of my group spent the same amount of time drafting a series of novels. We felt supported by each other because our seriousness about writing matched. Our seriousness about getting published matched too, we just chose different routes to get there.

Surrounding yourself with like-minded people does not mean that everyone in your group should look like you. In fact, research has shown that diversity in groups increases creativity. This is not a call for homogeneity.

Surrounding yourself with like-minded people does not necessarily mean that every writer in the group should write in the same genre. Group members can write in the same genre, but it’s not a must-have. Some specialized groups will only work because the genre they write in requires expertise or familiarity with the genre that not every writer has. (Like a screenwriters’ group, or a poets’ group, or a group focused on “hard” science fiction.) However, many other groups thrive while everyone is writing something different. Diversity increases a group’s potential. It does not diminish it.

My group is comprised of novelists, short fiction writers, nonfiction writers, ghostwriters and poets. Many of us write in a variety of genres. This mix has been invaluable to us over the years. Everyone has always had something new and fascinating to share about their current project.

It doesn’t matter if you’re trying to make a living or if you’re just trying out a new hobby. Both approaches to writing are wonderful. The point is to form a group with writers who approach writing and
publishing with similar levels of seriousness. Form your group with like-minded writers.

A healthy rhythm of regular meetings takes the buzz of “the new” and grows it into the strength of “the dependable.” This is when being in a writers’ group shifts from a novelty to something you just do because you are a writer.

Meeting regularly at the start will also prepare your group to survive the days and weeks that you inevitably miss meetings.

Years ago, my writers’ group met once a week at a restaurant. After a few years, life got busier for all of us. Various members now had babies to care for, or spouses with busy schedules or increased responsibilities at work. Weekly restaurant meetings were no longer feasible (or affordable). So, we settled into once-a-month meetings for a while. Then we met even less frequently. A group member eventually moved across the state. Then we started meeting regularly again. Then off again. Etc.

Our meetings have ebbed and flowed for more than a decade now as our lives have changed. Without our early, regular meetings, we may not be a group today. At those meetings we got to know each other, become friends and celebrated our first publications together. Our shared history of regular meetings keeps the group tied together when we’re too busy to meet consistently.

Set a schedule of regular meetings that work for everyone in your new group. Stick to it but change it as necessary.

In my next post we’ll cover two more important ideas about how to form a writers’ group. Between now and then, get out your favorite notebook and start brainstorming around these questions:

What are your writing goals?

Remember, they can range from “I want to learn to become a good storyteller” to “I want to get my book proposal signed this year.” Don’t be ashamed of your starting place. Every published writer was in the same place you are at some point.

Who do you know that could be a “like-minded” writer?

Who do you enjoy talking about writing with? Who seems to understand your writing and publishing dreams intuitively? Who do you think might be someone you can trust with your writing? Start a short list of names.

Where and when would you have time to meet?

Jot down a quick list of ideas. The local library. The coffeehouse. The bookstore. A classroom in your school. The lunchroom at work. Writers’ groups can meet anywhere.

Stay tuned for my next post, “How to Start a Writers’ Group, part 2.” Until then, keep writing!