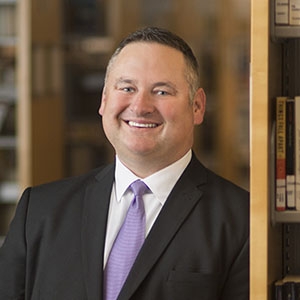 Lance Werner, executive director of Kent District Library, has been named the top librarian in the nation by Library Journal.

The 2018 Librarian of the Year award honors a professional librarian among nominees from across the country for outstanding achievement and accomplishments reflecting the loftiest service goals of the library profession. Werner was recognized for his strong leadership, effective legislative advocacy and championing access for his over 200,000 patrons in Kent County.

Werner is the first – and only – Michigan librarian to win the Librarian of the Year award.

“My version of leadership is to get the best people I can, give them what they need and then get out of their way,” Werner said. “I’m one gear in a big machine where everyone is important.” Werner credits this philosophy as a cornerstone to building strong advocacy among his team, municipalities, strategic partners and patrons.

“Working with Lance is exciting,” said Michelle Boisvenue-Fox, KDL’s director of innovation and user experience. “I admire that he has respect for all of our staff and genuinely wants to do the best for our patrons and communities.  This shows in the relationships he has grown over the years and our efforts to grow our KDL family to include more and more community groups.”

“I don’t feel like I have a job, it’s more of a calling,” Werner explained. “I’m so blessed to do work that I love, with those that I love, for those that I love. I consider myself a public servant and want to add to the greater good and touch the lives of future generations.”

“As the 30th recipient of the LJ Librarian of the Year award, Lance exemplifies the dynamism and keen intelligence we expect in a winner,” said Rebecca T. Miller, editorial director of Library Journal and School Library Journal. “His deep understanding of the importance of building and nurturing strong relationships at all levels has resulted in improved service for his community, enhanced benefits for the Kent District Library staff, and improved the outlook for libraries across Michigan. We are very excited to name him LJ’s 2018 Librarian of the Year.”

Werner will receive a $1,500 cash prize and is featured in Library Journal’s January 2018 issue, available in print and online. Werner was previously a 2016 LJ Mover & Shaker and 2017 Michigan Library Association Librarian of the Year.