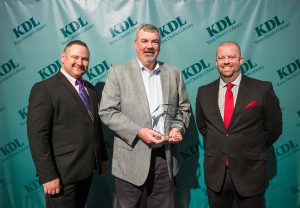 Kent District Library is pleased to announce that Amy Van Andel and Randy Hansen are the recipients of its first ever Library Champion Award. The award honors individuals and organizations for their advocacy and support of KDL.

Van Andel is recognized for establishing a new KDL branch in Ada. The Amy Van Andel Library and Community Center is scheduled to open in early 2020. Van Andel and her husband, Steve, are the lead public donors on the project and the library was named in honor of her support of and belief in the importance of libraries.

“I am honored and humbled to receive this award,” said Van Andel. “Libraries have played a vital role in my life since I was a small child. I am grateful for the amazing team at KDL and the passion they bring to their work every day. I sincerely believe that libraries have the power to strengthen and transform the communities around them and I am thrilled to be part of the expansion of KDL’s reach and expertise into Ada.”

Hansen, president of Centennial Securities Company, Inc., received the award in recognition of his company’s steadfast support of KDL and for being the Presenting Sponsor of Literary Libations since its inception four years ago. Literary Libations is KDL’s annual fundraising gala featuring presentations by well-known and bestselling authors.

Hansen said, “I want to thank KDL for this award. I accept it on behalf of all our employees and advisors who never cease to amaze me with their contributions of time, talent and treasure. As Centennial begins our 40th year, we will continue to strive to be an outstanding community partner. “

The awards were presented at the Literary Libations event on Thursday, September 6.