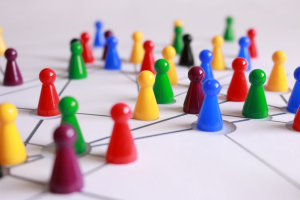 Why would a library be so interested in offering games to patrons? One of the key components of many games is literacy! Understanding the rules of a game often requires players to read, comprehend and put into practice what they’ve read for an enjoyable play experience.

Games can require quick or thorough decision making, group discussion or astute deduction of other players’ deceptions, or strategizing based on a variety of information. These skills are commonly used in daily life, and having a safe environment in which to practice them is helpful as well.

By participating in gaming experiences, players can gain skills in cooperation, critical thinking and balancing chance and strategy while having some fun face-to-face with friends (and with no screen needed) for free. Creating the time, space and opportunities for free entertainment allows the library to help the community grow its connections and skills.

Board games have recently experienced a renaissance and a flood of designer games based on some European gaming concepts have entered the market. These games strike a different balance between strategy and chance than well-known board games of the past. Designer games are less likely to rely on knocking players out and instead upon end-game scoring.

Some games, like Splendor, may focus on giving players a multitude of possibilities for successful strategies. Players can choose to focus on one strategy or select multiple avenues to keep in balance for the endgame, keeping in mind other players’ strategies as well.

Additionally, designer games use mechanics that come through the theme or setting of the game, such as Settlers of Catan (pictured) or Ticket to Ride. Certain mechanics are commonly used in designer games, but game designers work to match up mechanics thematically with the games aesthetic. This also gives designer games an edge in engaging the audience and maintaining their understanding of game mechanics.

Rolling dice and moving markers may still be used in designer games, but sometimes players are free to move wherever they like. Other times they have many markers that can be placed in rounds of play to gather resources. Sometimes, everyone makes their moves at once. Choosing a particular role to play each round is a common mechanic. Other times, players work cooperatively against the game itself, such as in Pandemic, or against a traitor in their midst among the players.

Tabletop games aren’t only cards and game boards however. There are also roleplaying games in which players inhabit a character and in cooperation with everyone at the table,  fight monsters, explore the world, challenge political regimes and at the end of the day, find they have a group of friends in the game and outside of it.

Following the release of the 5th edition of Dungeons & Dragons® and with the advent of live streaming technology, there has been a surge in popularity of tabletop roleplaying games like D&D. The social interaction and cooperative strategy, which are a focus of D&D, makes it an ideal game to turn strangers into friends. Players at the table use their variety of skillsets to solve problems, with certain characters being more skilled at solving certain sorts of problems, but needing the support of their fellowship to achieve things as a group. Adventuring parties are guided by a Dungeon Master through a series of challenges to level up the characters into nigh-unkillable heroes. The oral storytelling is cooperative - the Dungeon Master sets the scene and player characters interact with it and with each other.

Having livestreaming of actual play of roleplaying games has lowered the barrier of entry - watching other people play provides a simpler solution to learning the rules than reading the entire Player’s Handbook and Dungeon Master’s Guide.

Kent District Library provides access to a variety of board games with different difficulties, challenges and styles with their KDL GO! Pack: Family Game Night collection, with options for Preschool, School Age and Teen/Adult. We hope offering this variety will help people find the kind of games they enjoy. In our collection, we also offer a selection of books published by Wizards of the Coast related to 5th edition Dungeons & Dragons (published between 2014 and now). Also, find out which branches offer D&D and board game events to teens and adults by visiting kdl.org/events. Check out these articles for more information about the benefits of games and roleplaying games.