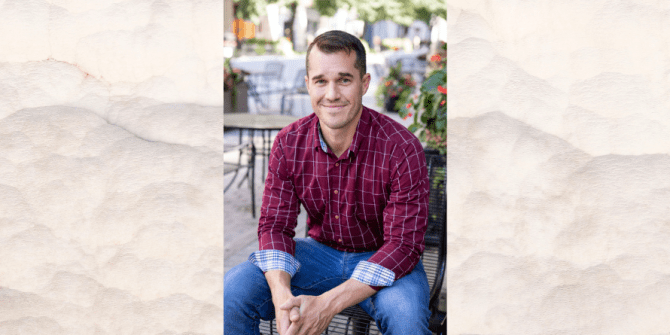 Meet Brett Allen, a local author from Fremont, Michigan. His novel, Kilroy was Here, is a dark comedy based loosely on his 2009 deployment to Afghanistan as a Cavalry Officer with the Army's 10th Mountain Division. The story follow's Lieutenant Rye, a battle-hungry Cavalry Officer, through a year-long deployment on a rural outpost in Afghanistan. As he struggles to find meaning in the war, he befriends a local interpreter and begins to see his mission through a different light. Brett’s prose will take you right into the war zone with his descriptions and keep you chuckling with his tongue-in-cheek humor.

Notably, Brett’s perspective from his service in Afghanistan sets this novel apart from most. Brett tells us, “The lion's share of literary works coming out of the Global War On Terror can be placed into two categories: shoot 'em up stories and broken soldier stories. Though these stories are important to tell, I felt they misrepresented a vast majority of veterans who served in Iraq and Afghanistan. Not all of us spent our deployments kicking in doors, so I wanted to tell a story for all the underrepresented veterans, the behind-the-scenes soldiers, sailors, airmen and Marines that kept the war machine running and whose main enemies were boredom, complacency and superior officers with "good ideas."

Brett’s journey to writing was self-discovered after graduation through humor. “I attended Michigan State University, where I earned a degree in Supply Chain Management (the final of seven major changes). Simultaneously, I participated in the MSU Army ROTC program where I learned the basics of being an Army Officer. It was in college that I began dabbling in creative writing, producing short (hopefully humorous) blog posts for a friend's website, "Lies About Ben," where the site's administrator would post a daily lie about his brother Ben. It was the positive response I received from these posts that made me realize I wasn't entirely terrible at writing. After that, it was just a matter of constant practice to take my writing from "not terrible" to "acceptable" to "decent with heavy editing."

His advice to aspiring writers is, “Never stop writing and never stop reading. Except maybe to eat and sleep. And maybe don't neglect your family. There will be days when you feel like throwing in the towel, but if you can recognize them as simply "low points on the timeline", you will get past them. Find several reliable Beta readers that will give you honest feedback on your work. Be okay with receiving honest feedback on your work. Don't kick your dog. Or cat.”