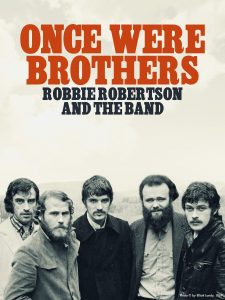 Long ago, sometime around 1984, when I was home for the summer and staying with my parents in rural Michigan, I picked up, at a yard sale, for a mere quarter, a slightly worn copy of the album “Music From Big Pink” by The Band. (It was their first album, released in 1968.) I was somewhat familiar with their music, having already started to work my way through many of Bob Dylan’s albums from the sixties and seventies, and knew of The Band’s work with him.  I took the LP home, listened to it once or twice, and put it away. It was several years before I rediscovered this seminal work by one of the great rock groups of all time.

I was reminded of all this while watching the new documentary “Once were brothers: Robbie Robertson and The Band”, which explores the history of the group and is mostly narrated through the reminiscences of Band member Robertson, who played a significant role in writing many of The Band’s greatest songs. Combining archival film clips, photographs, and contemporary interviews, and lots of music, “Once were brothers” is both an elegy to a group broken by death—three of its original five members have died since 1986—and a celebration of a rock group loved by so many for the way they mined the deep veins of American music without ever seeming to fall into the trap of nostalgia.

With hits such as “The Night They Drove Old Dixie Down” and “The Weight”, The Band is also fondly remembered for the way they wrote, worked and sang together, with every member playing a crucial role in his own way.  Still—and this is my only real complaint against what is otherwise a wonderful film—it’s obvious that “Once were brothers” is not only narrated by Robertson but is also to some degree presided over by him, which is ironic given the beautifully collaborative way the group made music. While Levon Helm—who played drums and sang in the group—is justly celebrated by the film for his contributions—Garth Hudson, who played organ, speaks briefly only once (that I recall), which is a shame, given his incredible keyboard work. (It may be that Hudson, who has always seemed to me the most retiring of the Band’s members, was reluctant to talk more.)

With that caveat, I still found “Once were brothers” a highly worthwhile journey, especially for fans of The Band, but also anyone interested in the history of American popular music.