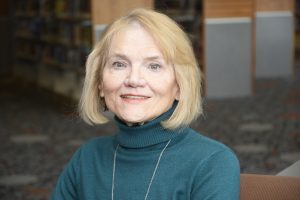 When Carol recently found out that KDL went fine-free, she was thrilled.

“I was like ‘Hallelujah!'” Carol said. “KDL became my shining star.”

Carol had stopped her regular visits to the Kentwood Branch of KDL due to her overwhelming fines. On one of her many library visits with her four granddaughters, they had each checked out a handful of books on her account. Then Carol faced some health challenges and the books didn’t get returned for several months.

“That’s when we stopped coming; that was the end of that,” Carol said.

Now that her fines are no longer an issue, Carol and her granddaughters are back. They check out books, hang out on rainy and snowy days, use the printer to print school projects, attend programs and the Farmer’s Market and chat with other patrons.

One of her granddaughters is in the gifted program at her school and the Kentwood Branch is a great place to find books that match her interests and reading level. She particularly likes books on archeology.

“KDL is more than just books,” Carol said. “It’s a great place to explore your life and interests.”

Carol thinks the staff at KDL is helpful and positive. One time, she and her granddaughter had to ask a staff member multiple questions on a single visit.

Carol’s passion for the library started in childhood. When she was in kindergarten, before she was able to read herself, she checked out a “Boxcar Children” book from her school library. She asked her mom to read it to her, but her mom thought it was too “wild” for her since the characters in the book lost their parents.

“I checked out that book every single week until I could read it for myself,” Carol said.

“She said when she saw my name on the check-out slip every single week, she wanted me to have the book.”

As an adult, Carol's family moved to Rockford. When she found out that none of the school libraries in the district were operating, she was appalled. She partnered with other people to take action.

“Within two weeks, we had all the libraries painted. We had books coming in. Every single library in the Rockford School District opened,” Carol said.

Carol’s passion for the library extends to the future. She would like KDL to consider offering an ambassador program where students from the gifted programs are paired up with refugee students. They can learn from each other.

She also suggested a program where children bring their grandparents to the library and the grandparents share items from their history. Carol attended a program like that with her grandson.

“They told me I could bring anything I wanted from my history and share it. I brought a wooded wall phone, a butter churn, a Mickey Mouse phone, a dial phone and old metal skates. The kids’ favorite item was the dial phone. They couldn’t figure out how it worked.”

With Carol's lifelong love of the library and her great ideas, maybe we should convince her to come work for KDL. She would fit right in!