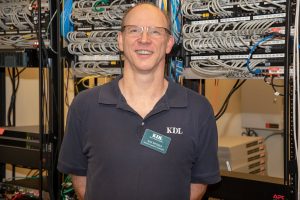 In 1999, the first installment in The Matrix series hit theaters, Britney Spears' debut album hit store shelves, and the first season of The Sopranos aired on HBO. At KDL, however, we were excited about something else; the hiring of Ray Mysels, who celebrates his 20-year anniversary this year!

Brought on as a Computer Support Technician, Ray was later promoted to Computer Support Specialist and finally named Network System Specialist to better reflect his role. Since starting at KDL, advancements in networking have drastically changed the way that Ray does his job. From sitting at his desk, he can complete tasks on 300 computers in 20 buildings that once upon a time would have required him to physically go to every single machine.

According to Ray, the best part about working at the Kent District Library - Service and Meeting Center is the peace and quiet he enjoys tucked away in the IT Dept. in the rear corner of the building. “[This] gives us the opportunity to focus on things to a degree that might be difficult to do out at a branch. It’s also filled with friendly people. And we have awesome potlucks!”

One thing that Ray never could’ve imagined when he first started at KDL 20 years ago was the lending of iPads and mobile hot spots to patrons. “I also think staff being able to access their exact work environments from home would have seemed pretty remarkable. For that matter, I’d have to say I would never have expected us to have brewery tours and home brewing contests. Now THAT’S progress.”

Thanks for keeping us up and running and for helping to make KDL awesome, Ray – and congrats on 20 years!