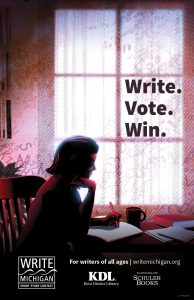 Kent District Library and Schuler Books are proud to announce the semi-finalists in the eighth annual Write Michigan Short Story Contest. About 1,100 Michigan writers from all over the state entered the contest.

The top five stories in each age category (Adult / Teen / Youth/Spanish), as chosen by the celebrity judges, as well as the Readers' Choice winners will be published by Chapbook Press using the Espresso Book Machine. Copies will be available in March 2020.

Adult
Odyssey by Daniel Johnson
The Summer of Andrea by Susan Lovell
Return to Aberlorne by Michelle Kastanek
First, Do No Harm by Debbie TenBrink
Pete and Odell by Tonya Peterson Brood
Nature vs. Nurture by Jim Owens
The Secret to Growth and Greatness by Annelise Trout
Wanted by Sean Keast
The Devil in Niyah's Eyes by Robert Papp
For the Stars by Lauren Miramonti

Youth
The Moon Queen by Cecilia Woodring
Hide and Seek in the Dark by Emma Stange
Birds of Flight by Allison Malone
A Brush with Fame by Leila Schmidt
The Dark Halls by Ensley DeYonker
Diary of a Galaxy Princess: The Forbidden Planet by Gabriella Murphy
Finding Hope by Ashley Cole
Oakleaf Island by Ezra Lee
Sara and Ruby's Animal Sanctuary by Carri Schautz
Urban Virus by Ramona Wilke