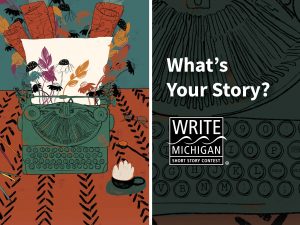 Kent District Library and Schuler Books are proud to announce the semi-finalists in the ninth annual Write Michigan Short Story Contest. About 950 Michigan writers from all over the state entered the contest.

The top five stories in each age category (Adult/Teen/Youth/Spanish Youth), as chosen by the celebrity judges, as well as the Readers' Choice winners will be published by Chapbook Press using the Espresso Book Machine. Copies will be available in March 2021.

Dance With Me by EF Coigne
Dark Lord Sounds a Bit Harsh, Don't You Think by Benson Brazier
Forever Things by Karen McPhee
Tree Rings by Bailey Burke
In the Tradition of Superstitious Puerto Ricans by Elena Aponte
Dahlia by Liene Strautnieks
Carrie the Spare by Ryan Wieland
Strawberry Jam by Ariella Hillary
The Hunt by Gavin Uitvlugt

The Iris City by Autumn Brutyn
Glass Slippers by Kevina Clear
Remember? by Hannah Haines
Oasis by Grace Yao
The Body in the Creek by Kate Zalapi-Bull
Adventures in the Time World by Catherine Schellhammer
Multitudes of Blue by Lani Khuu
Mayan Jaguars by Sofia Hernandez
The Littlest Chickadee by Grace Jacobson
Edwin_Memory_Drive: Loaded by Abigail Kloha

Star's Journey by Lillian Stielstra
The Stones by Andrew Wright
The Mystery of Mrs. Green by Meadow Rawlins
The Big Decision by Kylie Lenon
Just a Dream by Mahika Srivastava
Who Knows Where the Railroad Goes by Zack Zupin
Adventures in Fairy Land by Diana Gerard
Missing by Caroline Van Horn
All for Placement by Shelley Ouyang
Space Cat by Ellie Hardy