Access to OverDrive, Libby, and Hoopla is currently down. 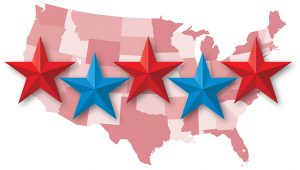 For the third year in a row, Kent District Library has been recognized as one of America’s Star Libraries, as rated by the Library Journal Index of Public Library Service. KDL was one of only two libraries in Michigan to receive this honor. The Ann Arbor District Library was also named a Star Library.

Library Journal scored 5,608 public libraries and identified 262 star performers in 2020. Library scores are based on physical circulation, circulation of electronic materials, library visits, program attendance, public internet computer use, Wi-Fi sessions and e-retrievals. Libraries are ranked by category, based on operating expenditures, and the top libraries in each peer-group category are recognized as a Star Library.

“This year more than ever, we are pleased that Kent District Library has received this honor and value the support that our patrons and communities have shown over the years,” said Lance Werner, KDL’s Executive Director. “The Star Library designation is welcome confirmation that KDL provides the library services that our residents want and need in their lives.”

Libraries can earn up to five stars. This year, KDL earned a four-star ranking, up from a three-star ranking last year, reflecting increased value for people who are served by the library.

Library Journal is the oldest and most respected publication covering the library field. The Star Library designation began in 2008.