KDaLe is excited to present the seventh annual “Book Inspired Brewing” home brew contest! Imagine taking your favorite book, shoving it into a carboy and letting the magic of fermentation turn it into liquid literature gold. Kent District Library, in collaboration with Gravel Bottom Brewing, Railtown Brewing, Horrocks Market and Pike 51 is calling on home brewers to enter this unique competition; creating a beer inspired by your favorite titles or authors.

The top 4 brewers will get a chance to brew a scaled-up version of their winning beer with professional brewers at either Gravel Bottom Brewing, Railtown Brewing, Horrocks Market or Pike 51, to be released sometime next summer (Date and Place TBD). 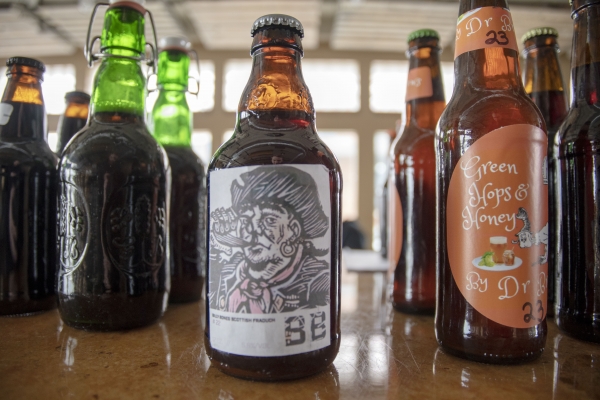 In addition to being judged on flavor, aroma, mouthfeel and appearance, your beer will be rated based on how well it fits the theme (Book Inspired Brewing) and the story behind it.

Judging will be done with a panel of Gravel Bottom, Railtown, Pike 51, Horrocks and KDL staff, along with local home brewers and other industry professionals.

How the beers are scored:

Please do not use nuts.

Due to time constraints, please no Pilsners or lagers.

This form is now closed. Email webmaster@kdl.org with questions.

Brew Day: Late Summer/Early Fall (To be worked out with Breweries after winner is selected)

Beers must be submitted at one of these partners:

Please include the recipe, beer # and a brief statement about how your beer fits the theme of “Book Inspired Brewing.”

Check out these book/brew combos by past winners:

Nick and Osama brewed a "Gold" Coffee Stout called Cassims Misfortune that was based on One Thousand and One Nights, or more specifically, the story of Ali Baba and the Forty Thieves.

Nathan made a Saison called Saison Melange that was inspired by the Melange mined on the planet Arrakis in the novel Dune.

Although it isn’t a polyjuice potion, when the notes of coffee, vanilla, cinnamon, and maple combine, your senses are transfigured. If you do finally make it to the bottom of the glass, you’ll feel like you’ve won the TriWizard Cup.

Where the Tart Things Are – A Guava Berliner Weisee inspired by none other than Where the Wild Things Are by Maurice Sendak. After a few sips, we were shouting “I’ll drink you up!”.

Or take inspiration from your favorite author:

Poe Stout - A dark and bitter brew guaranteed to put you on edge.

Kinsella Cider - Light and bubbly, crisp and sweet, this cider is best shared with friends and over good stories.

Books and Stories for Beer-Brewers

These books are rated as 4+ stars on Goodreads.

Books and Stories for Beer-Drinkers

While you wait for the next KDaLe brewery tour, sing drinking songs with the Hobbits and learn what makes a stout dark and a pale ale pale.