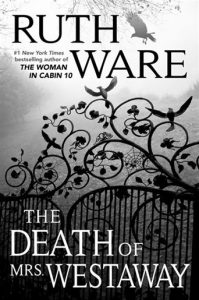 KDL librarians share their favorite book from the past year.

The Death of Mrs. Westaway by Ruth Ware
This is my absolute favorite kind of book - gothic suspense featuring an orphaned heroine alone in the world who might inherit a fortune. Hal is desperate for money after her mother is killed in a car accident; just desperate enough to investigate a letter from an attorney implying she might have an inheritance coming from a heretofore unknown grandmother. However, in order to claim it, she must go stay in a creepy house in the middle of nowhere with her possibly nefarious long-lost family members and an ominously hostile family servant. I neglected all chores to read it because I HAD TO KNOW WHAT HAPPENED!
Susan Erhardt
Youth Services Specialist
Plainfield Township Branch

Ladder to the Sky by John Boyne
Maurice Swift is like an Adonis. His good looks are only rivaled by his ambition, which unfortunately is NOT matched by any creative talent. Enter Erich Ackerman, a lonely, well-established author and professor with a terrible secret. There starts the beginning of a life of betrayal where Maurice will stop at nothing to quench his thirst for literary fame. Told in four parts woven together by the common thread of Maurice’s deceit, there are unpredictable and sickening twists in every section. With his signature flair, Boyne’s Ladder to the Sky will haunt you.
Nanette Zorn
Adult Librarian
Cascade Township Branch

The Testaments by Margaret Atwood
For fans of The Handmaid’s Tale (both the 1985 novel and the Hulu series), The Testaments provides the must-read backstory of Aunt Lydia and the future of June’s daughters. Aunt Lydia gives a testament of the making of Gilead and the remaking of herself into one of its key players, exploring choices she was forced to make. June’s daughters, two sisters with disparate upbringings, testify to their separate truths. Atwood is a master at crafting multidimensional characters and refusing to cast the women in her novels as stereotypes or monsters.
Penni Zurgable
Adult Librarian
Cascade Township Branch

Furious Hours: Murder, Fraud, and the Last Trial of Harper Lee by Casey N. Cep
Harper Lee’s To Kill a Mockingbird was first published to wide acclaim in 1960. In the decades since, the book has been loved by generations of readers, securing a solid spot for itself in the American literary canon. Despite its popularity, however, its famously reticent author never wrote another book (although a book she had written previously was eventually published in 2015) and avoided the public eye for the rest of her life. Cep fills that gap with the gripping Furious Hours, a story that Lee started to write, but never finished. It’s a book that’s part true-crime and part history, as well as a reckoning with Lee’s complicated life and why she never comfortably fit the image created for her by the status of Mockingbird.
Mark Dunham
Adult Librarian
Krause Memorial Branch

We are always available to help you find your next favorite read. Stop by soon!