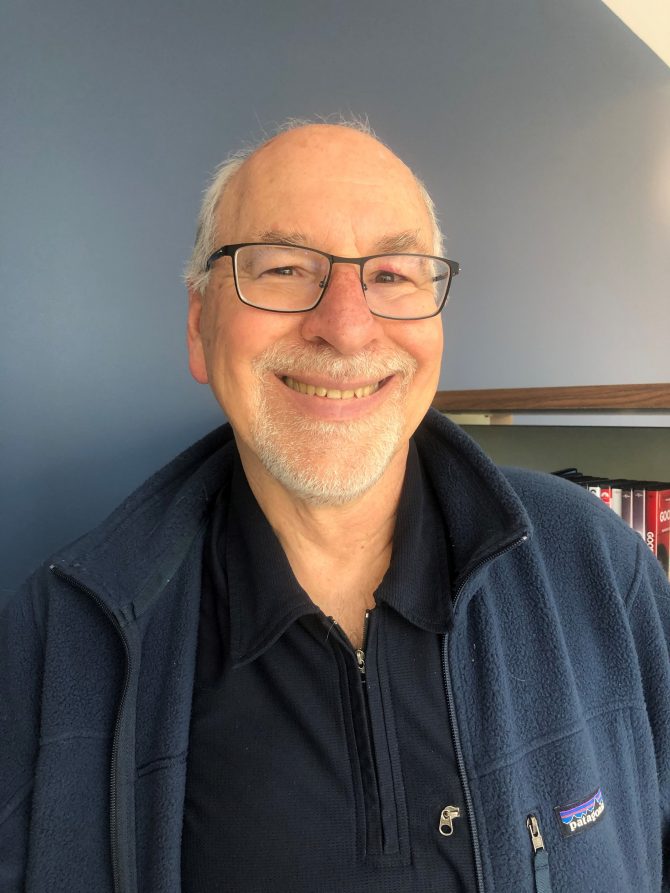 Jim has been involved in Ada development since 1989 when he joined an architectural firm that had the township as a client. Later, he became the Ada Township Planning Director, a post he’s held for more than 20 years and a post that, eventually, brought him into the library’s gravitational pull.

It was back in 2013 when Jim and his colleagues began to recognize Ada sorely lacked a civic building. Talk turned to establishing a library in Ada that would function as a community facility. The Amy Van Andel Library (AVA) was thus conceived.

Jim likes to remind us that “Libraries are no longer just vast book depositories, but a magnet for people in the community, relevant places that meet today’s needs.”

Jim sees AVA Friends of the Library as a catalyst for book discussions, author panels, book signings and bringing cultural issues to forum, while extending its presence in the community, as, for example, having a booth at the weekly Ada Farmer’s Market (opening Tuesday June 8).

Not a big reader as a child, Jim is somewhat of a "Johnny-come-lately" to the joys of reading. In fact, it wasn’t until college and an introduction to Ken Kesey (One Flew Over the Cuckoo’s Nest), that Jim began to read for pleasure. Now, books inform Jim’s work, sometimes in shocking ways.

He was both embarrassed and dumbstruck to learn, for example, that the early and foundational role of a city planner was to both instigate and enforce racial segregation.

This he learned from The Color of Law, a KDL book he borrowed, read and even discussed on a recent You Tube video. In it, author Richard Rothstein, makes historical connections between intentional racially divided zoning regulations begun under the Wilson administration and the unintentional continuation of racially segregated housing with its legacy of economic disparity that haunts us down to this very day.

“My own community is, perhaps, not exempt from these practices that originated as a means of achieving racial segregation,” Jim says, citing such exclusionary practices as minimum lot size and square footage requirements.

The ethical responsibility of a public servant was brought forward in another book Jim recently read and recommends titled The Great Influenza. It follows the outbreak of the Flu Epidemic of 1918 that killed 100 million people worldwide, but is now thought to have had its locus in Kansas and its spreading power from a government cover-up that put war bond parades before public safety.

At nearly 70, Jim is considering retirement from his career position but probably will never retire as a volunteer with a hand in public services. He will stay active with KDL and continue to serve as a member of the Land Conservancy of West Michigan’s Land Protection Committee.

An ersatz skier, Jim now enjoys hiking around the Grand Canyon, the greater Southwest and, recently, Maine’s Acadia National Park. Wife, Jeanne, is just as active, serving as a volunteer with the Ada Historical Society and training for a series of half-marathons.

They are planning a second trip to Italy, soon, with a special focus on Lake Como and the Lombardy region. Part of those plans are sure to be based on travelogues, memoirs and commentaries they’ve borrowed from the Amy Van Andel Library.

To learn more about joining the AVA Friends of the Library go to www.adalibraryfriends.com, or find them on Facebook at Friends of the Amy Van Andel Library.